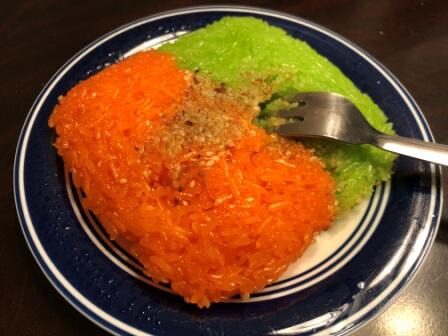 I found this flashy, colorful delicacy at the Vietnamese section of an Asian store and decided to try their version of their biko.
I call it biko de kolores obviously because of its flashing colors. It’s hard to miss them and the colors are screaming “pick me up” from the shelves.
There’s nothing extra ordinary about the biko de kolores. It tastes like the regular biko, sticky and not so sweet except that there’s a shower of crushed sesame seeds on top.
Biko is a popular form of rice cake in the Philippines made from just four ingredients– sticky rice locally known as malagkit, coconut milk, brown sugar and a pinch of salt.
Biko comes in different variations. Some top it with latik, a thick syrupy caramelized coconut cream as condiment for biko and other Philippine kakanin or desserts.
My favorite is the age-old traditional biko recipe my parents used to make since I was a very small kid, and I have yet to find one that tastes exactly like my parent’s biko..
They cook biko especially for there’s an event the next day like a picnic, a potluck, it’s somebody’s birthday, New Years eve and sometimes just when the craving hits.
I remember my siblings and I used to fight for the burned section at the bottom of the pan (we call it “dukot” in Cebuano). I make biko from time to time and intentionally burn about half of it because I like it that way, but it just takes so much effort and time that buying a ready to eat serving is more practical.

The What
2 cups glutinous rice or malagkit
1 1/2 cups water
2 cups brown sugar
4 cups coconut milk
1/2 tsp salt
The How
Cook the glutinous rice with the water in a rice cooker until the rice is ready but not fully cooked because you will still cook it some more with the other ingredients.
While your malagkit rice is cooking, combine the coconut milk, brown sugar and salt in another pot and cook in low heat, stirring constantly.
As soon as the consistency of the coconut milk and sugar mixture is enough, add the cooked sticky and mix well.

This is when I continue cooking until some of the biko overcooks in the bottom of the pan, by choice. Don’t follow my example if you don’t want to eat burned biko.